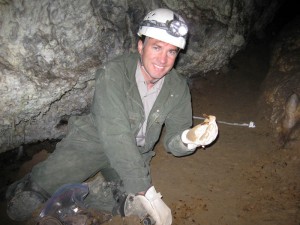 When 14 year old cousins James Gough and Frank Johnson discovered Timpanogos Cave in 1913, they didn’t travel along the upper passage where tours go today. That area was very narrow and has been excavated to make it roomy enough for most visitors to get through without too much trouble (if you don’t count the unlucky ones responsible for naming the stalactite “13 Stitches”, formerly known as “12 Stitch”).

Instead, they took the lower passage, now off limits, and protected by such things as light sensors so we know if anyone goes out of bounds. The only chance to get down there is on special projects such as the one going on now where resource rangers are removing as much of the man-made junk as possible.

The photo is of me helping out Andy, Bonnie and Daniela on that project today – possibly my last chance to see that major section of cave. I spent a few hours digging out the old, rusty metal mesh placed along the walkway when they used to take some tours that way. It’s all history now, so they have to account for every tidbit we remove, marking which section of cave it came from.

As a cave guide, I find myself wanting to dump out all the information I know about the passage, about the area permanently turned dark black from dynamite smoke, about some of the features down there, etc., but I’ll refrain and just say that it’s more of the same as the rest of the cave but fun to get to lay my own eyes on it all.