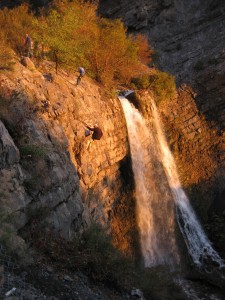 I’ve taken the neighborhood kids rappelling twice in the last two weeks. Here’s a picture from Battle Creek Canyon this week. Two weeks ago, I sent them over an 80′ cliff in Dry Canyon a mile from my house.

Some of the boys had very little fear and thoroughly enjoyed the whole adventure, which is great; but the ones who impressed me most didn’t start out that way.

Two 12 year olds were visibly shaken as they eased over the first awkward cliff. One – after hanging just over the edge and trying to get started for a few minutes, glancing down repeatedly despite everyone’s admonitions not to – started to cry.

But neither one ever backed out! One moved steadily downward despite his shaking knees, and the other did the same once I tied a piece of webbing around his harness to offer an extra belay (a fireman’s belay on the end of the rope could stop them at any time).

When’s the last time you did something that scared you? Have you ever done anything that TERRIFIED you? I highly recommend it. It changes your life as you discover that you’re more capable and courageous than you ever knew.

I’ve long believed that courage is one of the most underrated values in the world. We sometimes speak of it as if only daredevils and heroes have a right to it. Not so. Courage is for everyone.

By the second outing, the kids were running laps up the trail and down the rope as fast as they could go, loving nearly every minute. They made me proud. With determination and courage like that, what can ever stop them?