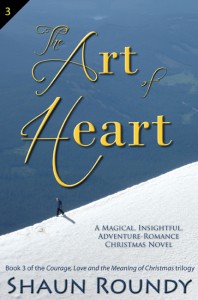 Last Saturday night, I finished writing the Courage, Love and the Meaning of Christmas trilogy.

The Art of Heart is the new title for book three (originally announced as “A Fall from Heaven”) and follows The Perfect Gift, picking up the story one year later.

This is definitely the best book of the series. It’s engaging, insightful, and has plenty of adventure, romance, breathtakingly beautiful and impressive moments, and of course all the plot twists typical of this series. It’s also over 100 pages longer than the first two.

From my perspective, what I’ll remember is how darn long it took to write! 🙂 I’ve had the basic storyline written out in my head for years, and much of the detail written down well, for years, just not as many, but it still took writing day and night for months to let everything finally settle into place.

Now that I’ve finished, I’m trying to put the same dedication into getting all caught up on grading my students’ papers. They turned in a major paper on Tuesday and I’ve been recording an average of 8 minutes of commentary on each one which I email them so they can take it into consideration for the next revision. It’s a good system, but time consuming, taking an average of half an hour per paper, which adds up fast!

As I get all caught up there, I need to learn how to play again. I’ve been planning to go watch The Bourne Legacy for over a week now, but every time it’s time to go, I keep deciding to stay and keep working. Until late tonight when I finally broke away. It was good! And as it ended with the shot of the Philippines ocean, I couldn’t help but think how nice it would be to away on my endless round the world trip already. If someone offered my $120k for my house right now, I’d take it and leave the country by January.

Anyway. Bed time. I need my rest so I can get up and grade all day again tomorrow.