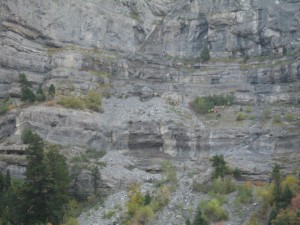 It has been a very slow year for technical rescues in Utah County. I think today’s was only the fourth! We usually have at least 3x that.

In this photo (click to zoom in), I’m the top left bright green dot. A girl fell 30′ and tumbled another 60′, and luckily stopped on a steep scree slope just down and right from me. You might call that a miracle.

She had serious injuries (but is expected to be okay) and no one knew exactly where she was. Her boyfriend, who had earlier hiked down the trail, got worried and borrowed a cell phone to call 911. The people who lent him the phone hiked up and, when the wind was blowing toward them, heard her screams. She had probably been there for an hour or two before they found her and tried to keep her warm while waiting for SAR and North Fork Fire to arrive. She was found high on the mountainside and far from any trails. Another miracle.

We set up 6 lowering stations to bring her down, including one I built with five pitons set in tiny cracks in the cliff just above her with water flowing over them. The operation went smoothly (of course), and a waiting Life Flight helicopter flew her away.

Maybe you’re thinking that none of these events are really miracles. It was just people doing small things. Like lending a cell phone. The bystanders who found the girl were hiking in the area anyway. SAR and NFF have rescued dozens of people along that stretch of mountain, and we consider it simple and easy. But that’s how most miracles come about, with just people, usually doing just small things.

If you were thinking these are no miracles, try looking at it from another angle, like the girl’s, who lay in pain for hours and who now recovers safely in a warm, soft hospital bed rather than dying on cold, hard rocks.

Now look around. Who do you see who needs a miracle? What small thing can you contribute? What are you waiting for?

One thought on “(Make) Miracles Happen”